Skip to content
Home/In the focus/Why is there a crocodile on the products and packaging of abrasive materials?
Previous Next

Why is there a crocodile on the products and packaging of abrasive materials?

To tell the story of the crocodile we can see on the products and packaging of abrasive materials, we must go back to Sweden, Baskarp in the beginning of the 1960’s, where a local abrasive materials factory called SlipNaxos was then located.

In 1960, Tom Nordquist was hired at the sanding laboratory at the factory, and his job was to help develop new flexible sanding materials. The current flexibility and performance were unsatisfactory, and a lot of work was being put into developing better materials that would meet new technical requirements. 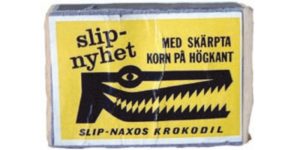 One goal was to develop products for the wood industry to meet the growing demand for pine products in an era when pine furniture was found in nearly every home. After changing to a new kind of paper, altering the binding agent and using white aluminium oxide as an abrasive agent, the new product began to take form. By 1961 the new „K series“ abrasive material was ready. It was a yellow product that was tested by such companies as NC-Möbler in Valdemarsvik and Totebo AB.  The general view was that „K series“ was too tame a name, so before its launch it was decided that these products should be given some distinctive feature to make them stand out more.

So the „K series“ was replaced by the Swedish word „Krokodil“ which stood for a sharp bite with a high abrasive effect. The image of a crocodile head was added and the new abrasive product series was ready.  At that time Tom Nordquist was presented with a life size wooden crocodile figurine with the sarp teeth … 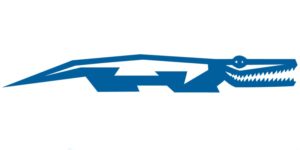 After the SlipNaxos factory moved to Västervik and a newly built abrasives laboratory was opened, the „K series“ was expanded by the development of other series. 45 years later the crocodile head was given a whole body, which was designed in Italy already.